Beenie Man Puts On His Charity Cap For Alpha Boys 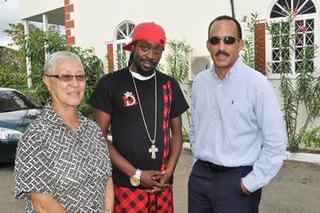 Dancehall heavyweight Beenie Man, is the latest reggae artist to use their image and influence for charity.

Beenie Man, who toured the Alpha Boys School on South Camp Road in Kingston earlier this week, will be hosting the Beenie Man and Friends concert next month to raise JM$15 million for the school.

The concert is schedule for Saturday May 21st at the National Indoor Sports Centre.

The Rotary Club of Kingston is spearheading the initiative, with Jamaica Social Investment Fund being the main sponsor of the event.

Funds raised from the concert will be used to refurbish the school’s dormitory, sporting facilities, kitchen and bathroom, as well as an upgrade of music equipment and the agricultural programme.

Weighing in on the move Beenie Man said he has always wanted to do the project.

Beenie Man said he is hoping to bring other artists on board including Beres Hammond, Bounty Killer, Agent Sasco and Mavado.

Go out and support the concert.