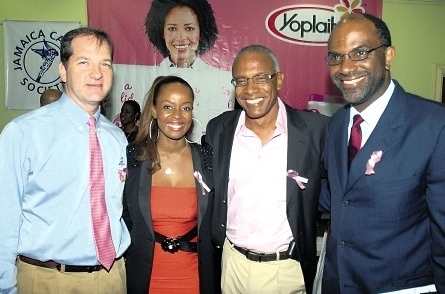 AS part of her ongoing support for the fight against cancer, singer Cherine Anderson recently teamed up with Yoplait and The Jamaica Cancer Society for their 2011 Breast Cancer Awareness Month Campaign, Save Lids to Save Lives.

This time the songbird will play an even greater role, leading the charge as spokesperson for the campaign.

Pledging her support to the cause, Cherine encourages the entire nation to support the initiative by Yoplait which will see The Jamaica Cancer Society benefiting $8 from every pink lid cup of Yoplait yogurt sold during the period October 1 to November 13.

The Jamaica Cancer Society and Yoplait under the theme Taking care of the women in our lives, invite all Jamaicans to take responsibility and play their part in encouraging and supporting the women in their life to conduct ongoing self examinations, routine screening and understand the importance of early detection.

This year's campaign also engages the men in our society to actively join the fight and encourage the women in their lives to do same.

"I just want to ask every Jamaican to support the campaign especially my colleagues and other young people. Almost everyone I know knows someone either directly or indirectly who has been affected by cancer. I believe as young Jamaicans we have power beyond belief and if we put our time, effort and hearts to help raise awareness, encourage and take care of the women in our lives, be it our aunts, sisters, mothers, grandmothers as well as ourselves, we will continue to make positive advancements in the overall fight against cancer. A we say 'rebel' so let's do the 'honorebel' thing and help make sure we raise awareness and reduce the impact of breast cancer on our Jamaican women." said Cherine.

Being an active supporter and member of The Jamaica Cancer Society, Cherine also supports the fight against Breast Cancer by endorsing other initiatives such as the recently held Mahima Benefit Concert, a charity event held on the lawns of The Jamaica Pegasus with proceeds aiding the Hope Institute -- a cancer-care centre in Kingston. Cherine delivered a heartwarming performance and inspired the sold-out crowd with powerful songs such as Shine on Jamaica and new single Eagles & Doves.