Vybz Kartel arrives at court to cheers from handful of supporters 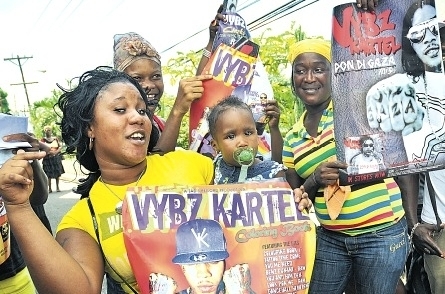 CAGED Deejay Adidjah 'Vybz Kartel' Palmer arrived at the Corporate Area Resident Magistrate's Court this morning where his legal team will make a bail application on his behalf.

The arrival of the entertainer, who has been in police custody for two weeks, was met with cheers from a handful of supporters gathered outside the court.

The celebration was however short-lived as the artiste, who was dressed in purple, was quickly escorted to a holding area inside the court building.

The supporters continue to wait to her the outcome of the application.

He is charged with murder, conspiracy to murder and illegal possession of a firearm.

Two other suspects in the case were charged earlier this week.