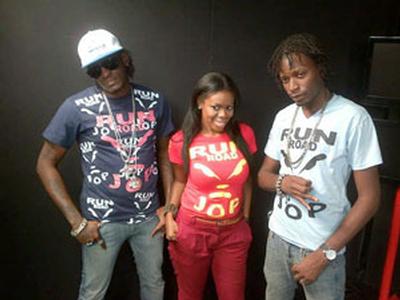 Lyrical sensation Aidonia has been dominating the market with new songs over the summer, so much so that the fans have given him the idea of ven-turing on the entrepreneur side.

The T-shirt line 'Run Road' came about after the release of the smashing single Run Road sang by Aidonia and Deablo.

"Run Road was just a slang the JOP family coined, then myself and Deablo recorded the song. We liked the vibe and so we linked Romeich to design a shirt with the slang to promote the song, and then we started wearing them out and the fans were enquiring where they could get our tees. That's where the business meeting came into play with my team and Romeich, and here we are now with the male and female tees. We have lots of styles to bring to the market, the fans are going to love it".

"The JOP 'Run Road' tees are ready and will be in stores tomorrow at MicNad Fashions at Lime Light in Half-Way Tree, DiTrends at Bargain Mall in Clock Tower Plaza and Grandeur Femme for the females. The prices are very affordable: Females $1,200 and males $1,500-$1,800 depending on design.

Aidonia will also be at each of the locations during the day taking photos and signing autographs with his fans, "so make sure to make the trod and 'Run Road' with Aidonia tomorrow," says Aidonia's publicist Kaylia