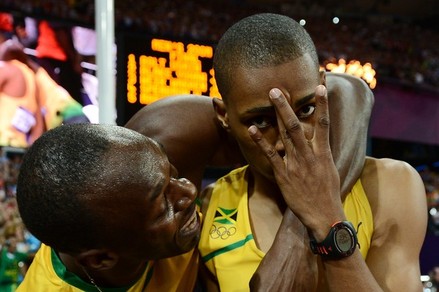 Star-studded athletes in London have adapted the 'Gaza Empire' sign as a celebratory gesture after double Olympic champion Usain Bolt used the signature gesture to mark his victories.

The move, which is displayed by bending both the ring and index fingers across each other while hoisting the hand in front of the face has not gone unnoticed as it has become a growing trend among numerous athletes competing at the 30th Olympiad.

Several pictures which have been making the rounds on the Internet sharing sites such as Facebook, illustrate the signature 'Gaza Empire' move which was perfected by dancehall entertainer Tommy Lee.

In one picture, four prominent members of the Brazilian male Olympic football team were observed highlighting the sign.

The picture of the Brazilian superstar players, Hulk, Marcello, Neymar and Pato has garnered the attention of several Internet users earning 282 likes on Facebook.

In another picture, 200m Olympic Gold medallist Usain Bolt is seen showing the sign along with team mate and Olympics bronze medallist in the same event, Warren Weir.

In another photo tweeted by Bolt shortly after his victory in the 100metre final, the now legendary sprinter displayed the Gaza sign with three Swedish women from that nation's handball team.

The recognition of the sign has been receiving worldwide attention and has found favour with many Jamaicans, who have all expressed delight at its illustration.