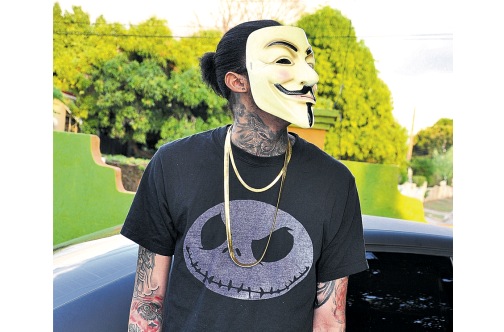 The entertainer was speaking in reference to a recent call by Antiguan bishop Charlesworth Browne to boycott his show in that country. The minister said Alkaline would bring "decadence and death" to his nation.

"The show wasn't cancelled, but the church community felt like I was a bad influence. They say I am the devil, but it's not like they are fighting me alone. They are really fighting dancehall," he told the Jamaica Observer.

The entertainer, said despite the uproar, he performed to a sold-out venue.

Recent calls for boycott to Alkaline's concerts have also come from the Caribbean country of St Kitts and Nevis, where he also performed.

According to the artiste, he is not bothered by the negative criticism.

"I have grown so accustomed to it that it doesn't bother me anymore. I find negative criticism rather amusing. It's fun for me. It has happened with a lot of artistes such as Vybz Kartel, Shabba and Bounty. Before me, it was the guy from Montego Bay (Tommy Lee Sparta)," he said.

Alkaline, whose given name is Earlan Bartley, said he has no intentions of changing his explicit lyrics or appearance as they are what set him apart from the competition.

"They act as if sex is taboo. I am not singing about anything that is not happening in the world. Jamaica is sexually immature," said the artiste known for his bleached skin and tattooed eyeballs.

He said he is currently working on a yet-to-be-titled EP and is preparing for gigs in Trinidad and Tobago, Canada, Dominica and the United States.

He also had a word for his critics about his supporters.

"They were the ones supporting me when I just started, and they are the ones still supporting me. If people really hated my music. I would be out of the music business already. The people love me this way," he said.