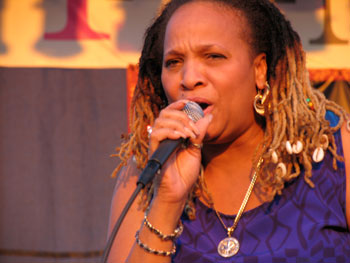 The 30-second commercial is currently being aired on several international television stations, and shows model Miranda Kerr changing her clothes in the comfort of her home while drawing attention to her Reebok sneakers.

As she makes herself comfortable, the turns on her television set and there goes the soothing old school dancehall rhythm thumping through her speakers coupled with Sister Nancy's vocals as she sings, "Bam bam, what a bam bam, this woman, never trouble no one."

Sister Nancy now resides abroad and was unavailable for comment. However, this is not the first time that her single has received the nod from international music enthusiasts.

The song has been labelled as a reggae anthem by the BBC and the accompanying commercial has received over 1.7 million hits online since its release in February, 2014.

Sister Nancy broke on the music scene in the 1980s courtesy of the late record producer Winston Riley, who recorded and released her first single, Papa Dean under his label Techniques, as well as the highly successful Bam Bam.

The song also gained international popularity as the soundtrack of American film Belly and was selected by Electronic Arts for supporting music in the video game Skate.

Some viewers on YouTube seemed satisfied with Reebok's choice to use the dancehall song in the ad.

"They are playing my old time favourite reggae song by Sister Nancy. Cool," one viewer commented, while another said "Love this commercial, that song is a classic and Miranda Kerr is gorgeous."