Stamma Gramma hits back at Tommy Lee ... after being described as a 'stalker fan' 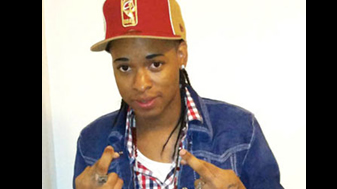 Just days after being called a crazy stalker fan of Tommy Lee Sparta and his team, up-and-coming artiste Stamma Gramma is refuting those claims.

According to the up-and-coming artiste, Tommy Lee Sparta and his team are not telling the truth.

"They are saying that I am a stalker and that I'm crazy, they are lying. I initially got in contact with Heavy D because I wanted to voice Tommy Lee on a rhythm. When I asked him how much he would charge me, him start say him nuh know. I told him that I was also a graphic designer and we verbally agreed that I would design a website for Tommy Lee in exchange for about eight singles. I don't understand how he's saying they don't know me when I spoke to Heavy D for five hours that night," Stamma Gramma told The STAR.

He went on to say that after sending them a preview of the website and even tweeting that fans should look out for the new website he was designing, someone from Tommy Lee's camp posted on Facebook that he was a fraud. He was later told that they would no longer be needing the website.

"I sent a Whatsapp message to Heavy D and told them that they were being very unprofessional and he messaged me back and said 'hush'. When them fly out recently, Heavy D asked me to send credit to his phone and me send it. He even told me that when he comes to New York, he would link me. What kind a person would link a so-called stalker?" Stamma Gramma questioned.

After realising that he would not be getting the songs from Tommy Lee Sparta, Stamma Gramma said he decided to voice a song instead.

"Me voice a controversial song and mi even big up Tommy Lee inna the song. The song was not made to endorse scamming, it's just a gimmick song. Tommy Lee of all people should understand this because him buss by talking bout demons. My song is just for entertainment. The only mistake I made was to call Tommy Lee name in the song and use a sample of his song," he said.

Adding, "Is one a Tommy Lee's demons a come back to haunt him. All my intentions were good. I wanted to progress Tommy Lee's career overseas and they know this. The reason why dem vex is because I released my song the same day that he released Spartan Angels and my song got over 30,000 views that day while his got only 5,000," Stamma Gramma said.