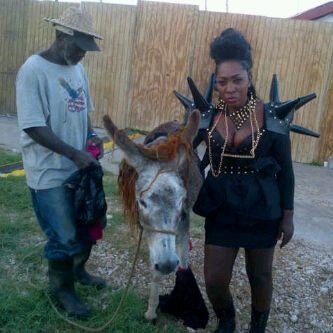 In the New Living Translation version of the Bible, John 1:5 reads, “The light shines in the darkness, and the darkness can never extinguish it.” Perhaps this enlightening quote from scripture sums up STING 2012 in a nutshell: A night filled with few stellar performances standing out above the drama and sub-standard efforts that dominated Dancehall’s biggest stage show.

STING 2012 was hyped in recent weeks as a revamped stage show focusing on strong performances, unearthing more young talent and an adjusted clash format. Though the show left a somewhat disappointing taste in the minds of hardcore Dancehall fans, some noteworthy acts and less recognizable names added flavor to an event that has lost some taste in recent years.

After a number of unknown acts and a clash of the bands dominated the first few hours of STING, it took a couple of veterans to finally put life into the show; primarily Wickaman, who delivered a spirited performance while honoring his long-time friend and fellow deejay, Captain Barkey, delving into their catalogue of hits from the 90s and 2000s.

Fellow veteran, Lady G proved she still has gas left in the tank while comedic entertainer Food Kartel also engaged the crowd by ‘cooking’ some of this year’s biggest hits likeUncle Demon (Shook) and many others.

However, it was a newcomer that really ignited the crowd inside Jamworld in Portmore early Thursday morning as emerging Reggae star, Chronixx elevated his worth, delivering a wholesome set capped off by his smash hit,Warrior while proving himself as a must-see attraction for 2013 and beyond. From there, things heated up as ‘The Strong One,’ Etana gave a rousing set while Iba Mahr andI-Wayne also delivered strong sets.

But the strongest performance of the night was from Reggae superstar, Sizzla Kalonji, who left no stone unturned with a blazing performance featuring its share of energy and controversy. Sizzlare-affirmed his strong stance again homosexual lifestyles while unleashing much of his storied catalogue, including Dry Cry, Be Strong, Slew Dem Wid Karate, Good Ways and Thank You Mama to an electrified audience touting lighters through his set.

One of the major undertones of this year’s edition of STING was the return of Busy Signal. The highly-acclaimed Dancehall/Reggae star, who was released from a U.S. prison last month after serving a six month sentence, performed at his first Jamaican stage show in over four years atSTING. The self-professed ‘Hothead’ showed no signs of cold feet, performing a commendable set, including classics like Nah Go Jail Again, Step Out and Pon Di Edge before going into his newer material with his track, Defense.

Deejay of the Year favorite, Konshens marked his four-year absence from STING with a strong return as he performed Gyal a Bubble, Stop Sign and Gyal Sidung alongside Subkonshusprotégé, Darrio. Reggae stalwart, Romain Virgo and former Magnum Kings and Queensrunner-up, Specialist were other notable performers on the night as they added punch to the Boxing Day show.

Speaking of punch, STING 2012 also featured an impromptu middleweight fight as prominent Dancehall superstar, Popcaan was left to fend off an unwelcome visitor to his set. Less than 30 seconds into his performance, fellow ‘Gaza’ artiste and former Portmore Empire teammate,Black Ryno interrupted Popcaan, seemingly challenging him to a clash. Popcaan pushed Ryno off stage, before a brawl ensued to the excitement of Jamworld patrons. After the two were separated, Popcaan taunted his long-time foe, telling Ryno “P**** go write song,” before returning to the stage to finish his set with tracks like Born Bad and proclaiming himself as the ‘biggest ting since Kartel buss,’ as he hailed his incarcerated mentor, Vybz Kartel.

Popular Dancehall diva, Spice held no punches as she called out her rival and fellow diva, Macka Diamond for a potential clash. When her calls went unanswered, Spice was met by an unlikely clash participant, who dissed her before the two exchanged pleasantries.

Following her set, rumors emerged of a fight backstage between her and Macka Diamondemerged. However, Spice quickly dispelled such speculation, claiming Macka Diamond ran from the clash before posting a picture on Instagram of her prop which included a donkey that she used to represent Macka.

Furthermore, word on the street is that J.O.P leader and popular deejay, Aidonia was arrested following his performance at STING 2012. During an otherwise enjoyable set, Aidonia was reportedly taken in by authorities after his set, presumably due to the use of expletives during his set.

Nevertheless, everyone’s attention was taken away from the controversy once more where ‘Gaza’ artiste, Tommy Lee Sparta lived up to his billing at STING. In his first solo performance at the event, Tommy Lee Sparta arguably got some of the loudest feedback from patrons throughout the night as he performed his list of hits like Uncle Demon (Shook), Some Bwoy and Psycho.

The final act of the night saw the long-anticipated tag team clash as Ninja Man and Kiprich took on Merciless and Tony Matterhorn inside a custom made boxing ring. Though the clash had its moments of humor and quality, it was mostly one-sided as Ninja and Kiprich easily disposed of their opponents, before Kiprich decided to take on the 'Don Gorgon,' in an entertaining battle for lyrical supremacy.

In the end, STING 2012 was filled with isolated moments of brilliance but will once again be noted for the no-shows of Dancehall’s elite artiste like Bounty Killer, Beenie Man, Vybz Kartel, I-Octane and Mavado, who failed to appear after unconfirmed reports emerged that he was not paid for the show. As STING approaches its 30th birthday next year, hope is that there’s still some way to salvage this wavering show.